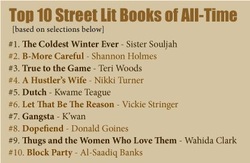 Books that paved the way

Slim, Iceberg. Pimp: The Story of My Life. Los Angeles: Holloway House, 2007 (1967).  This is a fictional autobiographical  story of Robert Beck (a.k.a. Iceberg Slim) and his cruel career as a pimp.  Pimp is a classic in the street lit genre.

Souljah, Sister.The Coldest Winter Ever. New York: Pocket Books, 1999. Daughter of a fallen drug lord in NYC, Winter Santiaga struggles to keep of the posh life that she's used to.  Souljah includes herself as a character in this raw tale that is said to have revived the street lit genre.

"A Fab Life" series (K-Teen/Dafina) by Nikki Carter
Hip-hop, drama, and glamour converge in these urban stories of teens trying to make it big.

"Hollywood High" series (K-Teen/Dafina) by Ni-Ni Simone and Amir Abrams
Daughters of celebrities learn that fame has a price, as their lives take unexpected turns.

"Hotlanta" (Point) series by Mitzi Miller and Denene Millner
Identical twins living a posh lifestyle in Atlanta have their lives turned upside-down when they discover their stepfather is a crime boss.  Similar to the "Gossip Girl" and Sweet Valley High" series.

"Kimani Tru" series (Harlequin)
Follows African American and Latino students as they navigate the ups and downs of high school and college.

"Lockwood Lions" series (Saddleback) by Stephanie Perry Moore
A Flip Book series, containing two stories in a back-to-back, upside-down format, one told from the female perspective, and the other from the male perspective.

"Platinum Teen" series (Precioustymes Entertainment) series by Precious and KaShamba Williams
Fourteen-year old Dymond and her crew go through their first year of high school together.

"So For Real" series (K-Teen/Dafina) by Nikki Carter
Follows 15-year old Gia as she figures out high school, friendships, boys, and her newfound popularity.

Sanchez, Reymundo, and Reymundo Sanchez. Once a King, Always a King: The Unmaking of a Latin King. Chicago, IL: Chicago Review, 2003. Print.

Sanchez, Reymundo. My Bloody Life: The Making of a Latin King. Chicago: Chicago Review, 2000. Print.
Tyrese. How to Get out of Your Own Way. New York, NY: Grand Central Pub., 2011. Print. 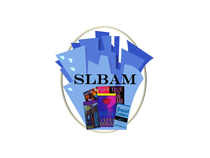 Check out this website to view the 2012 winners of the SLBAM.

All the Bluford books are available for free online in audio format. You can also download them to your device.
http://bluford.org/audiobooks/